Last loot of the year (November and December)LootPrevNextPrevNext

OmegaWerrier5 years ago
Hey, how's it going peps? I'm back again with yet another loot, the last one of the year. So, without further delay, let's get right into it.

To start out nicely, I got some more anime, namely Code Geass R1 and Wolf Children. (On a small side note: I still can't believe they're making a season 3 of Code Geass... I hope they don't screw it up with how nicely R2 ended :/ )

After her delay, I finally received ITEM #464595. I originally intended to get the nendo version of her since I prefer those over figmas (figmas are too small, if I want a correct body proportions figure, I'll go with scale; nendo's size don't bother me since they are chibi style), but I ended up going with the figma so my ITEM #144318 wouldn't be lonely.

I'm not really one to collect prize figures, only one seriously catches my attention for the uniqueness or of characters I like but aren't willing to pay a scale price figure for. But I just couldn't pass up ITEM #537794. She is so lively, and I really love the outfit and colors. I got her for pretty cheap and she didn't disappoint. Very nice quality for the price and she has a nice weight for her size. Definitely my new favorite prize figure.

And so the final stretch of the year began. And at the beginning of the month, I received a package from HLJ. The first items were ITEM #615923 and ITEM #619739. It was a nice and enjoyable build.

And the last, final and arguably most exciting item on the package was ITEM #331543. I'm not into God Eater, I tried to watch the anime that aired a while ago, but wasn't really enjoying it that much so I stopped watching it. But one thing I liked about the show, and actually had already seen and loved the design of, was Alisa. I adore her design, is so stylish and badass at the same time, and her weapon is awesome. When I got into this hobby in 2016 I looked into figures of her, but none of them really spoke to me. They either had weird poses or had the other design (the one with the white top, longer hair, and...different face???... something seems off to me), ITEM #198605 is a good example of what I'm talking about. ITEM #331543 was the first figure of her I cared about, so I got her through HLJ in one of their daily deals in which she was only 65€. I'm really happy with her, really like her expression and dynamic pose.

Then SHE arrived :3. After the hellish wait that I had to go through (2 months and a half WITH EMS!), customs finally decided to deliver her to me. I'm talking about, of course, ITEM #464806, my other most anticipated figure of the year (ITEM #463456 being the other one, present in my last loot). She is gorgeous *o* My favorite parts are the base, the axe, her hair and the detail in the leather parts of the armor. My Fire Emblem is completed at last -w- (at least for now). Honestly, I feel bad about not having anything else to say about her really... she just left me speechless ;P

The last item I'm going to be talking about is ITEM #549348. She got here today, And I'm really happy with her, she is super cute. I was oh so very slightly worried her hair color would be off looking at some of the pictures, but it came out a really nice pastel yellow like in the games.

And so the year comes to an end for me. I'm still waiting for ITEM #42052 and two fan-books of her to arrive (don't know if I'll even get her this year), but that's pretty much it. Much more happy with this loot than the last (since Camilla didn't arrive back then like she was supposed to, I was left with a sour taste in my mouth), even if this is a smaller one.

Being this the first full year while collecting (last year I only started in around August), it was a pretty big year for me in that regard. 33 figures in total (LIST #79089): 9 scales, 4 prizes, 7 Nendoroids, 1 figma, 2 amiibo and 10 model kits.
If I had to choose from the figures I got, which ones were the highlights, I'd say:
ITEM #144366 was the second Holy Grail I got;
ITEM #397033 which is the piece I've been the most in awe since I got her, and consider to be the figure with the best quality in my collection;
ITEM #463456 for being the figure I finally got to represent my favorite anime of all time + being the figure I spent the most on (in itself, so I'm not considering shipping and customs);
and ITEM #538799 which was the first model kit where I started to put a lot more effort into (detail painting, weathering, etc).

Though I'm not 100% sure, the likelihood of my collecting slowing down drastically is big. My temporary contract at work is almost done and is more likely than not for them to not hire permanently. And that would definitely mean the figure budget be reduced to basically zero. But who know's, maybe they'll surprise me ¯\_(ツ)_/¯.
The only Pre-order I have right now is ITEM #514852, which is already paid for. Otherwise, the figures I'm on the lookout for next year (if I'm even able to get them) are: ITEM #549364,ITEM #603854 or an Astolfo figure in general,ITEM #605216 and ITEM #647689 (technically the ones on this list LIST #76421 too, but I definitely won't be able to get all of that, on both the money and space front).


Well, that's it for me. I hope you liked this loot post, sorry for the text-heavy part at the end.

I hope all of you have a nice holiday season and kind 2018.

Until next time, OmegaWerrier out.

QotL: How was your year of collecting?

DigitalWarrior
OmegaWerrier • 5 years ago • #30124602Hopefully you'll be able to score some nice figures ^^
Yeah, I would really like to get some cast offs . I got just enough room in my room for a ikea desplay case that I will order nearer to the convention.
5 years ago

OmegaWerrier
Tarthos • 5 years ago • #30124875Nice! I missed it in theaters unfortunately so I haven't seen it yet but have some of the manga. Can't wait for it.I haven't read the manga, just watched the movie, so I can't compare them, but it has become my favorite anime movie and one of my favorite overall animated movies.
5 years ago⊛

Nice! I missed it in theaters unfortunately so I haven't seen it yet but have some of the manga. Can't wait for it.
5 years ago

OmegaWerrier
Shamelessotaku • 5 years ago • #30113771I wasn't able to get enough for a loot or haul because I only got 2 nendoroids this year ;-; but next year I will!!Your ordered definitely isn't anything of short! Eheh ^^
5 years ago

OmegaWerrier
Babygirl246024 • 5 years ago • #30119241Collecting was an absolute bust for me this year.. I was able to add a couple things to my collection but real life was a pain this year... Hopefully next year goes a bit better for collecting..Sending you good vibes so you have a better year then

OmegaWerrier
DigitalWarrior • 5 years ago • #30122489My year had been a bit crap in term of collecting. Because I don't order stuff during the year, I buy in bulk at the London comic con. Earlier this year, I came home with 8 statues that varied in price between £20 up to £120. At the 2018 Comic Con, I will be looking to collect 10 to 12 statues with some at a higher price tag.Hopefully you'll be able to score some nice figures ^^
5 years ago

Tarthos
HOW DO YOU HAVE A SILENT VOICE ON BLURAY ALREADY. AHHHHHHHHH
5 years ago
View more comments 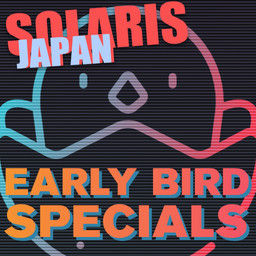 I mainly write loot blogs (2-4 months apart usually).
Thanks to everyone that checks them out, I hope you enjoy them ^^