arianazuko4 months ago
Hello everyone! My name is Ko and this is my first article after over a year on MFC!

To start things off right, I've decided to post my first loot of the year(about 3 months worth) and it's all Persona. I'm a huge Persona fan and would ideally own every single item, but due to my wallet, I'm mostly dedicated to collecting particular characters(*cough cough* Yosuke).

Now with introductions over, let's get to the loot! (Warning: Long, picture-heavy post. Extra pictures are under spoiler warnings.)

Here's a picture of it all together!

Goods
Zenmarket
For my first set of goods, I ordered from a proxy for the first time in years. I saw these acrylic stands through a private seller who unfortunately did not have the full set, so I went to buy straight from the source.

and these two clear files for free domestic shipping.

Luckily I really like the designs on all of them, so I have no regrets! And I have that many more Yosuke items :3c

Animetopia
My next set of goods is actually from a physical store somewhat close to where I live. They have a tiny shop with a ton of small goods like charms and badges from lots of different series, but most importantly Persona! I try to go there any time they post about a Persona restock so I can fill up my itabags!

I got a couple Morgana items for my Haru + Mona itabag and some more Persona 3 charms since I am trying to complete that set ;_;

Then, of course I got my best boys from Persona 4! The Yosuke pillow charm is my favorite since I love soft things and Yosuke! The giant Yu/Souji badge seems like it would also look cute on my shelf if I can figure out how to set it up oops.

Goods Republic
Finally, my last set of goods comes from Goods Republic! This store appeals to me since I don't have to deal with proxies and they sometimes have good deals especially with the free shipping and coupons.

I got this full set of Persona Q2 charms. This set also includes a lot of my favorite characters including Yu/Souji, Akechi, Shinjiro, Junpei, and Haru. I also just love almost all Persona characters so I couldn't say no. ;3

Recently, I've been focusing on making my room into a true Persona paradise so have been looking at more wall decorations too so I bought many!

This set of Persona 4 clear posters have so much cute art. There's also a nice mix of action-y posters and relaxing posters to create a nice amount of variety on my wall!

I also picked up this Persona 4 Dancing Kanamin tapestry and...

Aegis looks so beautiful and calm against the blue sky background in this tapestry.
Kanami isn't my favorite character but I found the art and the food theme adorable enough to throw in with the rest of my order. I was also really impressed by how the fabric felt for these tapestries since I'm used to most western wall scrolls which use a scratchier material unfortunately.

Figures
Now to the figures!

First, I got these Persona 4 prize figures of Rise and Nanako-chan!

I bought them for super cheap from a seller on Depop. The boxes aren't in the best condition, but I don't mind since they are prize figures.

Rise looks very cheerful in this figure with her wave and her foot positioning. Her hair is also very voluminous even if it's not too detailed. I'm really glad to have her while I save up for some of the more expensive scale figures of her >w<

Time for my precious imouto cousin, Nanako! She looks very sweet posing next to the TV which is of course showing off the Junes logo because everyday is great there! She has some flaws, but I am happy I found her especially since the best figures of her are all garage kits(and I have no skill).

Next, Kotobukiya's Persona 5 Joker and the matching Kasumi!

Here are some box pictures. I appreciate how vibrant the box is with lots of pictures of the figure. Also, the top of the box is pretty clever with the face peeking from part of the mask.

I'm glad that they re-released Joker with Persona 5 Royal coming out and the new Kasumi figure too. Too bad no bonus part re-release.

In the promotional pictures, I felt that his face was off but bought him because I love figures that go together and I was buying the Kasumi. However, he looks a lot better in person! His eyes look more focused and I love his classic messy hair.

Kasumi's hair is a vibrant red and the sculpting looks natural even on places like the line of her bangs. Her face is cute, but I do think she's a lil too blank faced for her dynamic pose and would have wanted some more emotion.

The dynamic poses and sense of movement is something I really appreciate in both figures. Their billowing coats and the sculpting on the folds of their clothes really prove it. The addition of Kasumi's ribbon contributes even further to this effect. It was a bit of a hassle to fit into the notches on the vines, but it looks great.

Kotobukiya's Persona 5 figures' bases are a big part of why I love them so much. The detail of having it reflect each character's All Out Attack and including a large version of their masks propping them up just make them so much better than the basic bases I see on a lot of other figures. I'm just weak to unique bases!

This figure is one of my grails and I'm amazed I finally got her! Luckily I'm usually awake when Amiami puts up their pre-owned figures, saw her, and was able to click fast enough. She was listed in B/B condition and although there's some light damage to her box, she looks perfect. The figure really shows off Aegis' charm with with her pose, battle damage on her body, and robotic parts.

Since I love this figure so much, I even bought a display case large enough to fit her 1/6 scale along with decorate flowers and lights. I hope you think she looks as lovely as I do!

Conclusion
Well, that's everything for now, but I hope to possibly share some future updates on my Persona collection in the future! Thank you for reading/skimming to this point and for the wonderful community here on MFC! Feel free to share your thoughts or just let me know your favorite Persona figure!

arianazuko
kin • 4 months ago • #94646983Hey, this is a great loot post! Sweet collection too, also love what you did with the Aegis figure
Thanks a bunch! I'm so happy with the great reception I got!
3 months ago

kin
Hey, this is a great loot post! Sweet collection too, also love what you did with the Aegis figure
4 months ago

arianazuko
azureblue • 4 months ago • #94598355No problem! KIMM134SAYA is the one I was talking about. Look through their loot posts and be jealous inspired!

Wow, thanks for sharing their profile! What an impressive collection that I am both jealous of and inspired by lol. Time to go broke scouring the internet for more merch.
4 months ago⊛

azureblue
arianazuko • 4 months ago • #94598200Woooo fellow Persona fan!
I think I might have(but wouldn't mind a link)! Unfortunately, it might amplify my jealousy oops. Seeing people's big collections make me want to collect even harder. I'm glad you like those items and thank you so much!
No problem! KIMM134SAYA is the one I was talking about. Look through their loot posts and be jealous inspired!
4 months ago

Yahallo • 4 months ago • #94598152Congratulations on your first article!
And Thank You for all of those neat pictures!
View spoilerHide spoilerAnyone who likes Sumi is solid in my book! 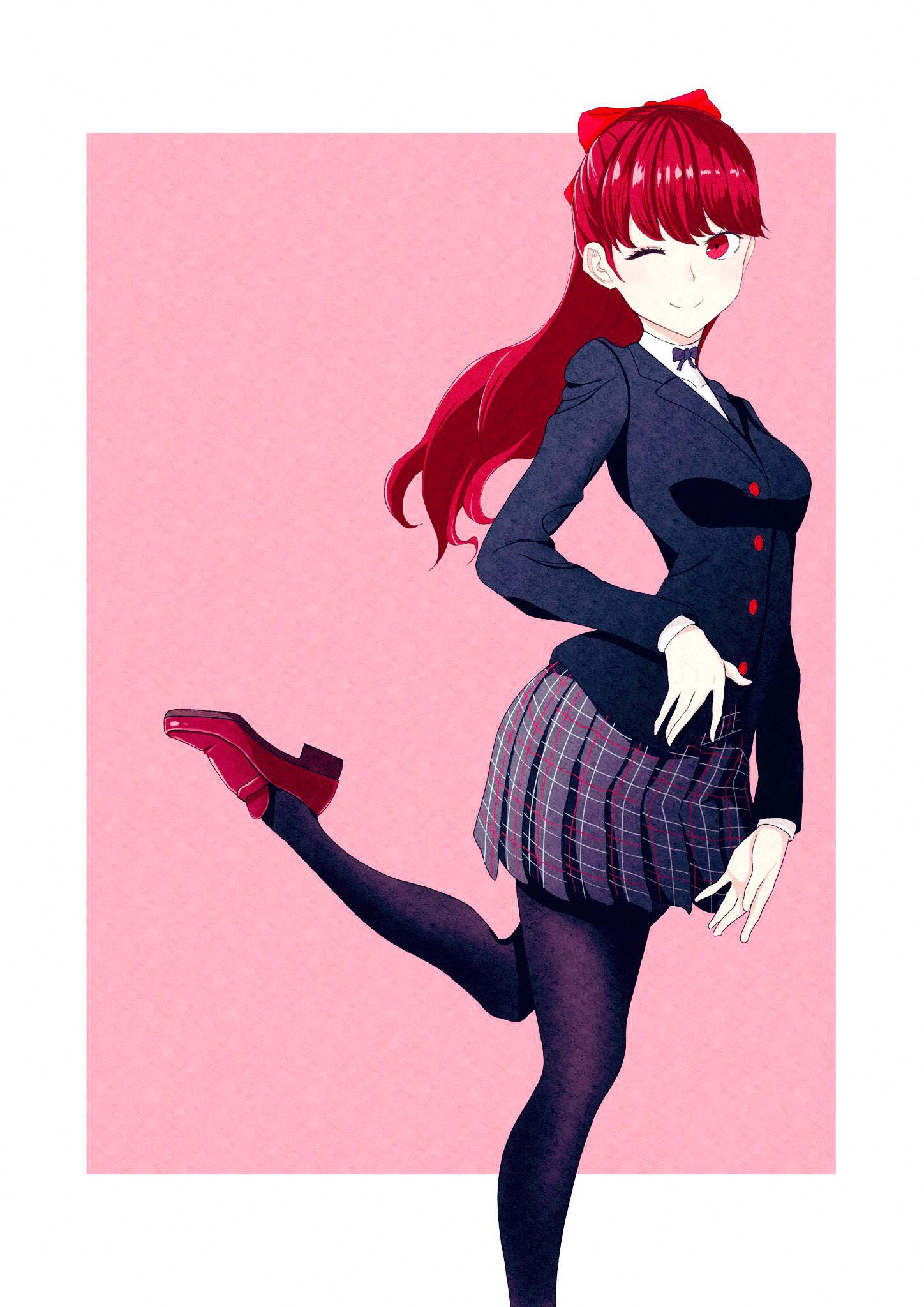 Thank you! Posting pictures was a little intimidating, but I'm glad you liked them!View spoilerHide spoilerAnd Sumi deserves all the love! I'm excited for future figures/merch of her!
4 months ago⊛

aykosan1
That Aigis display is just gorgeous! I love how eye-catching you made her seem
4 months ago

arianazuko
azureblue • 4 months ago • #94598140Hey there fellow Persona fan!
Have you seen the loot posts by that one hardcore SMT collector? Maybe that'll ease your pain of not being able to own every Persona-related merchandise (or maybe it'll make it worse? Lol). Those P4 acrylic stands and clear files are seriously cool. And congrats on Art Works Aegis!
Woooo fellow Persona fan!

I think I might have(but wouldn't mind a link)! Unfortunately, it might amplify my jealousy oops. Seeing people's big collections make me want to collect even harder. I'm glad you like those items and thank you so much!

setokaibaswife • 4 months ago • #94598131That's an awesome loot! I'm also amazed by your beautiful Aigis display!
The Nanako figure is my favourite one though. I'm also pretty envious that you have a store where you can buy goods like charms, that stuff is non-existent here unless it's Western produced stuff.
Thank you! I'm glad it could evoke those feelings for you too!

I can't blame you for Nanako being your favorite though with how adorable she is! I definitely got lucky to find that store since I agree Western produced stuff is more common near me too. But considering how popular my store has become, more stores should really follow suit! I really appreciate your comment especially as a reader of your articles too!
4 months ago⊛

Broserpina The magi-cooliest✧
That display with Aegis is so pretty!
4 months ago

kkat
You've given Aigis the home she deserves! Your display is beautiful.
4 months ago

Yahallo Defrosting Ice King
Congratulations on your first article!
And Thank You for all of those neat pictures!
View spoilerHide spoilerAnyone who likes Sumi is solid in my book!