A super cute and chubby-cheeked Miku. It seems to be a popular choice despite the other Espresto Mikus not being ultra popular, which I can understand.

The box for this figure can be either black or yellow, I have the black version. I think the yellow is for store sales, I can only assume because I see the yellow box in stores all the time.

This box has large pictures of the figure on three sides, and a large photograph of the figure in front of a sunny sky background on the back.

The black box with the yellow is pretty gorgeous. The shiny finish makes it look really sleek and fancy, and I like the back picture a lot. Not much to say here.

This figure comes in four pieces: The base, the body, the head, and the hand.

The pieces fit together well with the exception of her head. It's not super noticeable, but there is a visible seam where her neck meets her top, but that might just be me not pressing it in enough. Interesting choice to have the neck as a separate piece rather than her twintails.

Overall she's nice and sturdy, not wobbly and not really any super fragile pieces.

Miku has two large, cartoony blue eyes with large highlights. She has a toothy grin and is glancing to the side.

Look at that face. I originally thought maybe I got a messed up one since the face is so different from the picture, but no that's really what it looks like! It doesn't look very good from the front, but it looks fine enough from a 3/4ths view:

Still though, I think her eyes should be bigger and maybe lower, closer together... It's kind of insane how different it looks.

That being said, her eyes are adorable and the teeth look nice, they really nailed the toothy grin and avoided the grimace look that can sometimes result.

Miku's hair is in twintails as usual, and she's got short fluffy bangs with a more saturated blue gradient towards the bottom. She's wearing a red and yellow headset with little horns on top. Her twintails are short and reach only her mid back.

Really really cute! The color is nice and I love the movement in the hair. She looks a little more tomboy-ish and sporty, plus the shapes are just so appealing!

Miku is wearing a red and white jacket over a biking shirt and shorts. She has fingerless gloves on as well as white socks and blue shoes. In one hand she holds a large circular bag slung over her shoulder, and the other she holds a sport water bottle.

Really nice color coordination here! The jacket is really cute and I love how the stripes on the side match other colors on the figure—It feels cohesive.

The painting is disappointingly sloppy in some parts, but it is a prize figure and I didn't notice until I looked for it. Take a look at mine:

The jacket is really the only part that's like this, luckily.

Four stars due to bad painting.

This base is a large blue, glittery circle shape. It's raised and semi-opaque.

Blegh! Another Espresto base with terrible design. I hate hate hate these sparkly bases, they stick out so much and don't match the figure at all. Even a PUP base is better than these... I want to make custom bases so I don't have to look at these even though these are prize figures!

They're functional though, so I guess I can't rate them that badly. Giving it one less star than the others because I'm so sick of them!

Miku is standing on one leg with her other slightly off the ground and twisted outwards. She bends forward a little bit, and has one hand straight down to her side and the other bent upwards to hold her bag strap.

Cute pose as usual! This one in particular has lots of life in it and the props are really cute. It doesn't take up much space and it's visually interesting.

An excellent and wonderfully designed prize figure. Miku is at her cutest here, with a shorter hairstyle and delightfully cute props. I'd recommend it, but do be wary of the face. I think it's significantly different from the picture, so much so that it was immediately noticeable that it was off. Please be aware of this if you want to buy.

Despite the praise I gave, the face really disappointed me. If you don't mind it though, then go for it!

Thanks for reading! Check out the rest of my articles and photos if you like my content!
625 hits • 5 likes • 2 comments

awokey
I love the sports clothes aesthetic but not the low quality of the figure. Nice review!
1 month ago

laniisu
Nice review! I have mixed feelings about this figure since she doesn't look quite right in some angles, but I find the chuuby-face so cute!
2 months ago 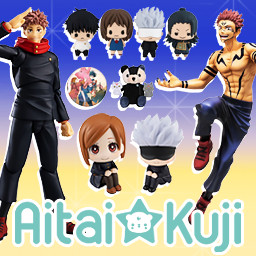 Here's the reviews I'll be putting up periodically. I really enjoy writing reviews, so please take a look!