Crows (クローズ Kurōzu) is a Japanese manga series first published in 1991 about high school delinquents. As of October 2007, it had sold more than 32 million copies of the 26 tankōbon volumes.

PLOT : Harumichi Bouya is a new transfer student to Suzuran High, the school of "Crows". In this school, everyone is a delinquent despised by the society and lives without school rules.
He then became the strongest in Suzuran High and lived up to his own words:

"There's nothing wrong with being a crow. When you compare them to the poor caged birds that have to forgotten to fly, crows are much better. Being a crow is good enough for me."

Worst (ワースト) was first published by Shōnen Champion in 2002. The series is currently being serialized in Japan and has been collected into 28 tankōbon volumes. Crows and Worst take place in the same universe.
Hiroshi Takahashi had also released Worst Gaiden which is the short collection of sides stories for the Worst series.

PLOT : Hana Tsukishima is a country boy that recently moved to city. He is a good guy, ingenuous and honest, but he is also very strong. His goal is to become the leader of Suzuran High. He and his friends encounter and fight many other gangs and rival schools, led by clan-logic and strength hierarchy.

Crows Zero (クローズZERO Kurōzu Zero) is a film based on the manga released in Japan in October 2007. The film was directed by Takashi Miike (Audition, Dead or alive, Gozu, Imprint - Masters of horror...), written by Shogo Muto and stars Shun Oguri (as Genji Takiya) and Takayuki Yamada (as Tamao Serizawa). The movie tells the untold story behind the characters in Suzuran.

Crows Zero 2 (クローズZERO 2 Kurōzu Zero 2) is a sequel to Crows Zero. This time, the film explores the legendary rivalry between Suzuran and Hosen high school.

alitibayan
Hi, just started collecting May of 2017. Hi to all the Crows from the Philippines!

childriot
Hello, I am a collector of action figures crows x worst from Indonesia .. nice to meet you

invinciblekungfu
Is anyone selling an unopened FBG Tatsuo green or black version?

bobun009
Does any of you have crows x worst figures FBG
for sell ? i have some already but looking for more if anyone want to sell you can pm me or email me
or any one know where can i get them ? i already check out Mandarake and Rakuten
Thank you
5 years ago⊛ benhan
Dive stopped producing CxW figures but there is a new comer collaborating with Regulus. 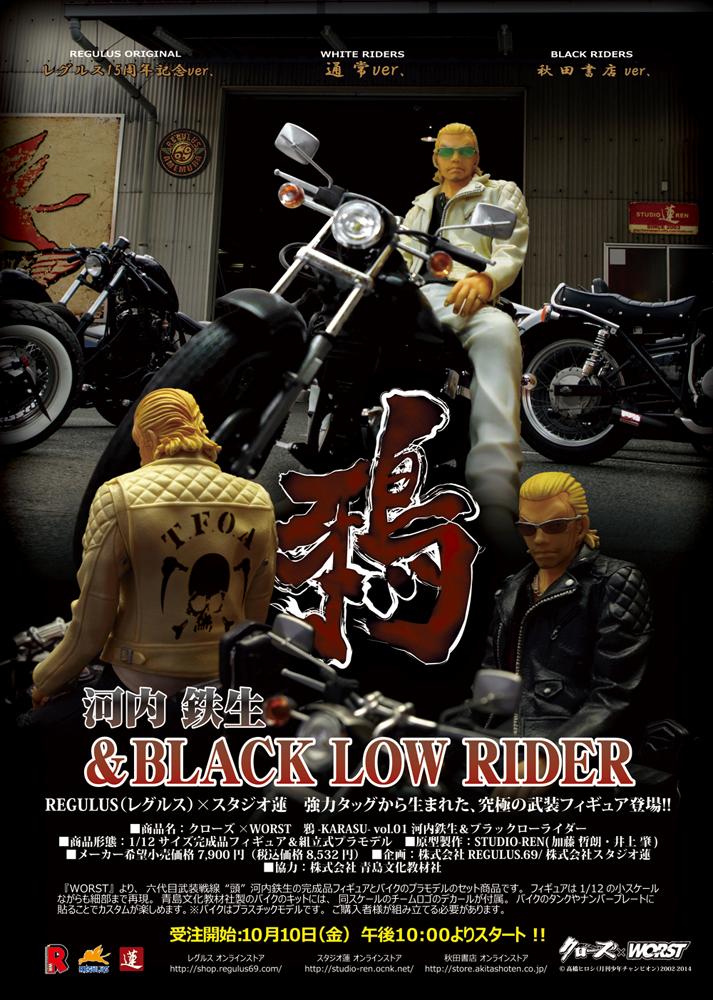 It looks great!
5 years ago

bobun009
Does any of you selling Genji and Serizawa (crows zero) ?
i need the real actionfigures
or any of you know where can i get those ?
please let's me know
5 years ago

benhan
Masakii • 6 years ago • #2229684Awesome news!
i really loved the first and second movie.
The third movie was out in April on Japanese theater. Anyone have watched it? Is Crows Explode any good? I don't think it will stick to the canon.
6 years ago
View more comments