Brand New for ¥3,497
└ A treasure is waiting for you! ✗
Pre Owned for ¥2,835
└ Check product page for item condition.
7 hours agoSponsored by Solaris Japan

Meatcat
my figure leaned so dramatically, it sucked ass. my girlfriend suggested using a blow dryer, and it worked amazingly. if u heat it gently and hold her in position on the base, it makes it way easier to fix the lean. one of the legs was the main problem point on mine, and we just gently held her in the desired position while the blow dryer warmed the pvc enough to adjust her. we switched it to cool to get it to cool in place, and she's all fixed !
2 months ago⊛

dojiuka
Found her without a box on Mandarake for 400yen!! I was so happy, really good deal if you ask me... she does lean but overall she's a gorgeous figure!
2 months ago

Elise_Grimwald The other Warner sister
I have no idea how anyone gets her to stand up. She leans bad, and nothing works. It's so bad to the point where I want to sell her, but I have a feeling no one will buy cause she leans so bad. :/.
3 months ago

moetron
because the skirt is so heavy, she leans a little bit... but i think i found a temporary solution? i used blu-tack (the stuff you put on the back of posters and such) around the pegs on the stand to make it stay better. i also put the blu-tack on the hip stand, the part facing the inside of the skirt because sometimes it moves around, as well as on the end of the stand that you attach to the base because mine was a little loose. don't worry about about residue or anything since blu-tack can be removed with another piece of itself. hoped this helped! <3
5 months ago⊛

Nefere
Mr_Bleach • 5 months ago • #85167367Can anyone share how they put the hip stand on? I can't seem to find any way to place it that doesn't make the leaning even worseI'll try the best to explain how I assembed her:
* I started with pushing feet pegs into the base. It took 3 mid-steps as I was careful with it and I couldn't put them at once (office female worker's here, my arms are quite weak),
* I put a long stick with a saddle part into the base. It's made to support a dress part I'll mention later. The highest part should be pointing to the center of the disc base as a picture shows,
* the worst step - you have to put both dress and upper part at once. 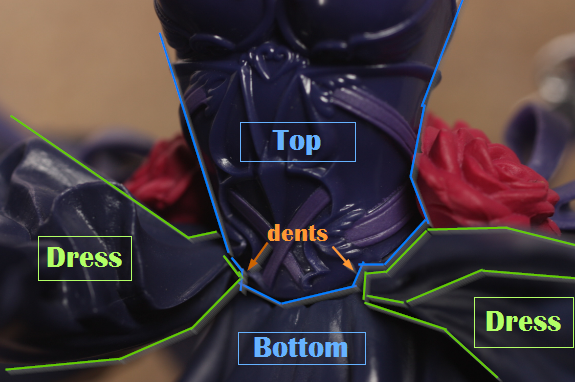 * I slowly inserted BOTH dress and top parts into the peg - taking care to not separate them so the top part would be secured by roses in the back. And making sure the dress part sits into the saddle-like support stick.

I've tried many times until it just clicks. Hope you make it quickly and without hassle!
5 months ago⊛

Mr_Bleach
Can anyone share how they put the hip stand on? I can't seem to find any way to place it that doesn't make the leaning even worse
5 months ago⊛

Nefere
catgirlsyndrome • 6 months ago • #83966233she leans really really bad, she always falls over. i love this figure but i cant display it :/My figure isn't leaning, but it was tricky to assemble her, as her top part have to fit with not only a hip peg, but with roses on an outer dress part (so finally she would look like: back, front). It took me like 30 minutes to get it right. Before I did it, she was easy to fall with the slightest gust of wind :/
5 months ago⊛

catgirlsyndrome
she leans really really bad, she always falls over. i love this figure but i cant display it :/
6 months ago
View more comments