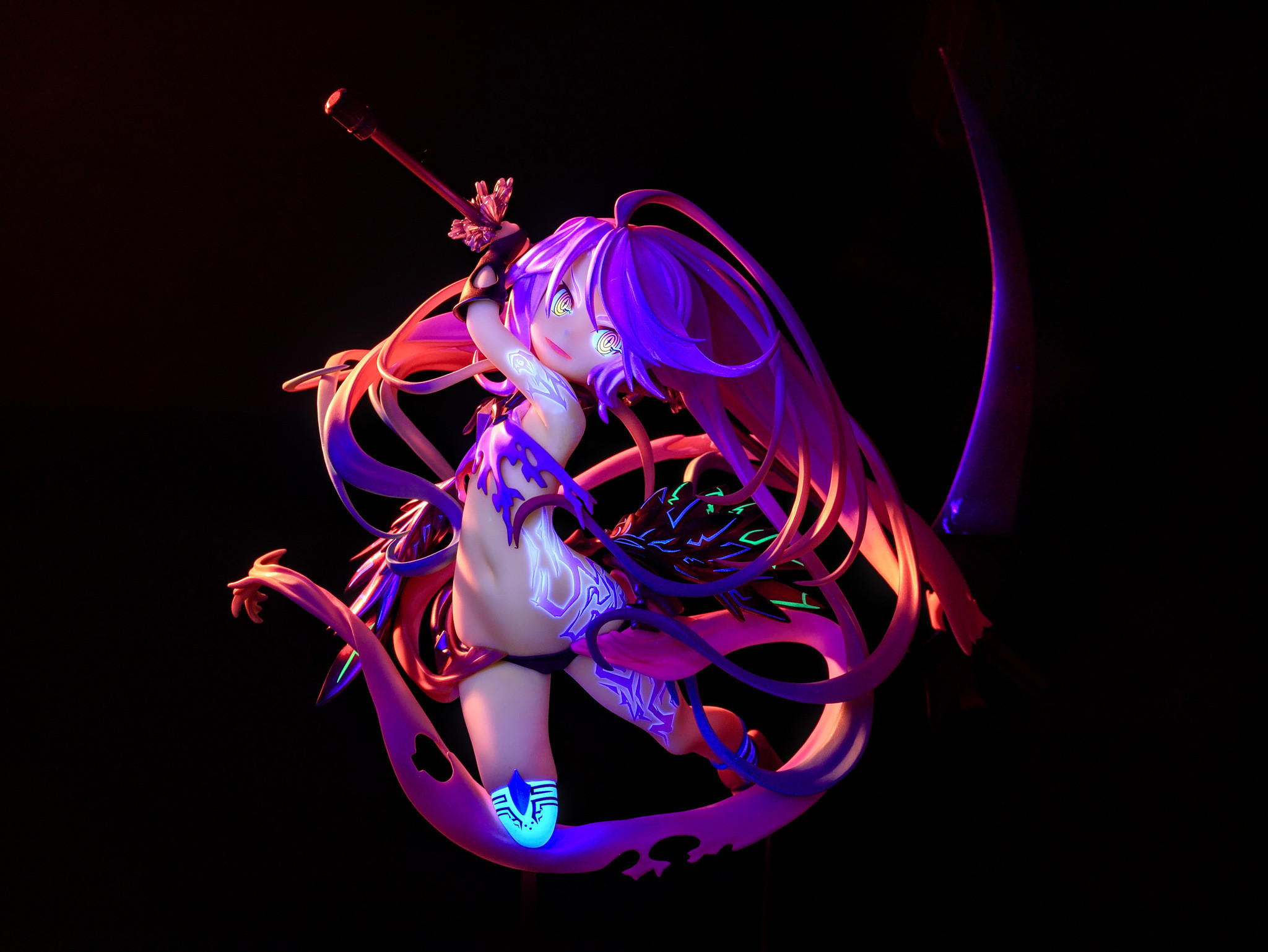 No added effects. The eyes, tattoo and other patterns light up in harsh blue or UV light. For this photo the figure was lit with the dispersed light of a blue laser from the front and a red LED light from the back on the left side.

Album of my earlier photos with a similar effect:
Blue light album

ROBBERGON
IxianNavigator • 1 month ago • #102307784I don't know anything about UV for display, but I don't really recommend it either. UV is the same reason why direct sunlight is said to be avoided. Blue LEDs don't emit in the UV range. So you could just use RGB LEDs set to 100% blue to achieve a similar effect. I personally however wouldn't use it that way as a permanent setup because I find that harsh colored lights (too much blue and green component) tires the eyes quickly. I have some RGB lights set up but I only ever use them with orangeish colors when not taking photos.

I figured that would be the case. Ill try looking in to some blue lighting i can switch to just for the effect when i show stuff off.
1 month ago

IxianNavigator
chachachow • 1 month ago • #102311707I'm surprised GSC didn't do a promotional shot with this kind of lighting! I wouldn't have known! How did you figure this out?They probably didn't give any thought about how it looks in blue light.

As for how I figured it out... I knew that objects can look eerily different in UV light. The effect is called fluorescence. When I got some RGB LEDs set up as ambient light then I noticed that objects also show this effect to some extent when I set the LEDs to 100% blue. I got into figures much later. At one point I ordered some laser pointer pens from China just for fun. And I realized that the blue colored one causes fluorescence more effectively. It also can be directed more accurately.

The problem is though that the beam of light is too small. Obviously, since it's a laser. So I used a fish-eye lens for dispersing the light. By leading the beam through the back of the lens it's possible to make the area of light bigger, but still not too big to light up the entire environment.

So I just pointed this makeshift laser lamp at everything in my room to see how everything looks.
Figures generally look either bland or outright weird/scary in this kind of light. There are just a few that are interesting. So I don't think that this is a thing that figure manufacturers pay attention to. With a very few figures you even can see that they used different materials for parts that in normal light look the same. Like arms look different from the legs. Or even the left and right arms.

You can see some of my earlier attempts with figures that looked interesting in this album. Some of these are not unedited, I adjusted white balance in post. Those are mostly the photos where you don't see much blue. But still none of them were "photoshopped" in a strict sense.
Blue light album
1 month ago⊛

chachachow disaster zone
I'm surprised GSC didn't do a promotional shot with this kind of lighting! I wouldn't have known! How did you figure this out?
1 month ago

Tweezey
Its lit!!!
1 month ago

Rikoei
So cool
1 month ago