Wanna get into vocaloid music but dunno which songs to start? Check out this post I've made to gradually ease your way in: thread/16834 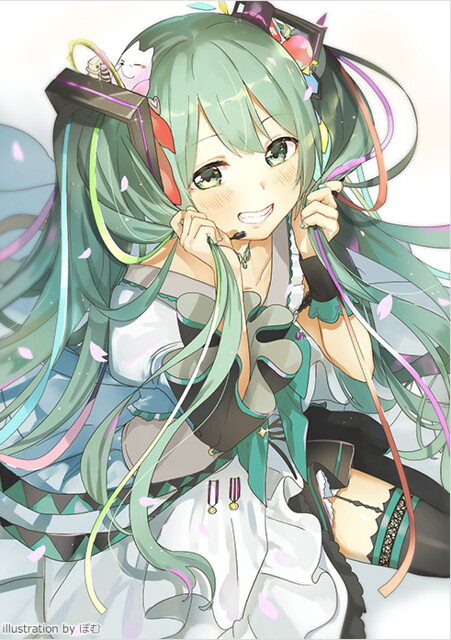 Vocaloids are my life: I adore all vocaloids but mostly Hatsune Miku ღゝ◡╹)ノ♡

After that, I just like any cute characters, regardless of series or franchise (≧▽≦)

Archiwheel
Happy birthday ! =D have a good one!
7 days ago

SourLullabies
Ooo okay, damage box = literally a tiny tear, got that on my list!

Oh and that was only a prediction, Sorry if I made it seem like there would be pop ups for the whole Crypton line! Hopefully there will be though, what a dream come true <3. Only time will tell :)
2 months ago

SourLullabies
I heard of Mandarake, but the website is a bit difficult to use, but I heard there's a lot of older goodies there, like figures and dolls. Thank you for the tip, I think the search thing is what bothers me the most about Mandarake, but I'll keep your tip in mind :), especially about the pokemon goods! Using japanese naming is a genius idea honestly, cheating the system aren't we ;)

We better get a pop up ver. for all the crypton vocaloid line up!! And as well for Nadeshiko, the line is quite popular honestly, no holding back on what characters will be next!

And you are so welcome cloud :D
2 months ago

SourLullabies
i should honestly check out AmiAmi's pre-owned section more, there's a lot of hidden gems i could fine according to others, thank you for the reccomendation, i'll try to look for the snow miku nendo and figma on there if i can :)

I'm glad you listened to meltdown, it's just so beautiful <3

Omg im so excited if yuru camp's S2 will bring even more popularity to the series meaning more figures!!! A pop up would be such a great addition to the lineup (which is honestly genius...), i'm getting pumped now ( ´ ▽ ` )

thank you for chatting with me cloud! glad to talk to some other figure collectors for their thoughts and opinions :D!
2 months ago

SourLullabies
i might as well put the snow miku along with her figma on my wishlist to keep an eye on her ;), when i collect figures from now on, i’ll put them on a wishlist for me to possibly order later on because i don’t want to waste money since i’m trying to pay figures upfront now to not get in debt, etc. i’ll get her one day hopefully!

Kagamine Rin is just adorable and meltdown is my favorite song. It’s melancholic, tearful yet powerful.

SourLullabies
i love your collection, i'm quite jealous of your twinkle snow ver. nendoroid of miku, she's so adorable ;)
i can see you are a vocaloid fan, Kagamine Rin is my favorite and I grew up listening to her songs <3
2 months ago

Maakie
Hello! Don't worry about it. I took a break for more than half a year from MFC, only because of quarantine I now have time for all of this again. ^^'' And wow, so much hours of work, I hope you're holding on! Is there any chance for a (short) vacation anytime soon for you?

Yeah I guess my 'updates' for you are that everything that I hoped to be doing in 2020 had to be cancelled. I won't be visiting my home country in 2020, I might be able to attend my sisters' wedding through livestream and my vacation for October/November is cancelled as well. It's a lot of fighting around with insurances to try to get as much money back as possible for these cancelled trips. Next to being sad for all the cancellations, the money fighting is also depressing. :( I hope things will go back to normal in 2021...

I didn't have a summer holiday...it was just...summer weather outside. :P But I have worked a lot of overtime in the last months, so I'll be able to take a week off in a couple of weeks. I'm mostly going to use it to sleep LOL.

I didn't really see lakka especially on sale here, not even during summer. I guess it really depends on which area you live in (as they are apparently from the middle and northern parts and I live in the south). And hrrmm well I think it was more like a lakka jam, so they probably inserted a loooot of sugar in it. ^^''

Yes! All the unpacking is done! Buuut...we are missing multiple parts we need to buy from IKEA (and you have to get it from customer service in person, can't order it from their website...). So the figure room is now stuck in an 80% finished state, which I am afraid of being in for a lot longer... >.<

About the language: They finally released Duolingo here and I have a 2+ month streak on it now. ^^ The language is super hard though...especially grammar... >.<

My PayPal is also finally working like it should and a bit over a month ago I started selling online again. Package shipping here is a mess, so I just started with everything small I can ship through regular envelope mail. If you want to check it out: www.ebay.com/us... . :) I'm still very nervous about it, because shipping to every place in the world is so slooooow right now. So I know I'm going to get complaints/PayPal cases/refunds, but hey, as I know have the time to do this (once I am back at the office I don't), I'm just going for it.

It is possible to return to the office, but my company lets you choose. And well, I see the most risk for infection using the public transport and I need to use the busiest public transport line in the country to get to my job, so...

As long as they are not forcing me back to the office, I'm not going. I really hope I can continue to keep working from home for a while, because even though the case numbers for Finland seem good...they only count the hospitalized and deceased. So anybody 'normally' getting sick or only testing positive is not counted in the numbers...it's unclear by how much, but the numbers should be wayyyy higher.

Ugh. :( Sad to hear that... :( I hope you are still feeling safe doing your daily things? Here in Finland everything has re-opened and depending on the company you work for some allow you to work from home (I feel very lucky). My home country and vacation country are both in a second wave though...both of those countries thought shutting down for 1 month was enough and after that just resumed normal day life... ( ⚆ _ ⚆ ) Numbers are rising, but their governments are just going ¯\_(ツ)_/¯ .

Right now her wedding is 'only' allowed to have 100 guests...I still cringe at that because the locations where it's being held are still small, but they allow everything 100 and under...

LOL don't buy those plane tickets, because yes, you can fly, but you're either not getting into the country or you're not going back. How the situations currently are for the plane tickets I have
- The one in NL I can go to, but Finland won't allow me back in
- The one to JP, I can fly to JP, but their border security won't let me in. You have to quarantine for 2 weeks in the airport on arrival in JP. My vacation was supposed to be 2 weeks...

So yeah with those plane tickets you're seeing, of course you can buy and fly, but you either won't get into the country or you won't get back. :I Flight companies don't care though, they have been earning so little money recently they just want seats to sell. About that, planes are super scary right now, none of them have social distancing and only some of them have mandatory masks. Stepping on a plane is basically 'get your free Corona here' and of course they'll seat you next to the guy that is coughing the loudest.

Well, I've been talking a lot about myself, but what about you? Everything good over there? Can you hang out on MFC more and work less? Any free days coming up or had recently? Anything in general interesting that happened? Any buys/sells to the collection?
6 months ago

LittlePisces
Heya! Thank you for those kind words. Yesterday was almost good until it had a bad ending. I was so upset that I decided to say my own feelings on here. I'm still young and have no clue what I am going to be someday. Reading those comments on that article made me more stressed about my future. But don't worry, I will keep on swimming. :)
7 months ago⊛
View more comments