Figures I own that aren't in the database: 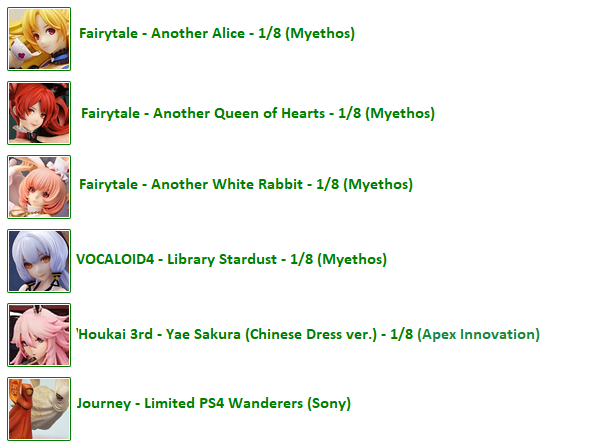 Pre-ordered figures not in the database:

110 in Prepainted22 in Action/Dolls55 in Trading

coral17
Fixed it! Sorry about that :)
5 months ago

Figureditout
Your inbox is full. I may or may not be totally innocent about that. >:)
7 months ago

gloria2011a
Happy Birthday! Hope you are having a great day!
9 months ago

melomania
Haha yeahhh I have a bit of a Dragonair collection...
1 year ago

gloria2011a
Yeah, I ended up ordering her at HLJ! She is really cute, I couldn't resist. I'm not sure about the cherries either, I think smaller cherries would probably look better, but the rest of the figure is just stunning. It just has much better color variations than the previous taito sakura miku. I hope the real thing is going to come out as well as the pictures. Are you planning to get her as well?
1 year ago

gloria2011a
That sounds like so much fun! Now I want to go to Prague sometime in the future. I love those quirky places, it's like putting yourself in another world, even for just a short time. I studied abroad in Cordoba, Spain, and it was a strange place too. It's famous for the mosque-cathedral, which is like a combination of islamic style building and decor with cathedral tower, and inside there were statues of Jesus next to the red-white arches. It's just interesting how did the religions fought each other in history and somehow coexisted in the form of this architecture. My host mom took me there for a Sunday mass, even though I am not Catholic - she said she didn't care if I were Catholic, everyone should have their own beliefs, but she wanted me to see the interesting Catholic mass :D

Yeah, I think you will be able to find her somehow. Everything I watched eventually ended up at an acceptable price, it's just a matter of time. If you really want her, she will come to you at some point :D

Have you seen the prototype for ITEM #886807? I think she is just so lovely! Thanks for telling me there's a new sakura miku come out! I like this one so much better than the previous one. The face looks more mature, and they are using some transparent paint for her sleeves, more shades of pink for her hair and dress. I am not a fan of those huge cherries, but they don't bother me either. I'm probably going to PO her at playasia, since that looks like the only place that still has her PO open.
1 year ago

gloria2011a
That sounds awesome! Where did you study abroad? Back in undergrad, I also took a semester abroad in Spain. It was so much fun, and I was also able to travel to other places in Europe in between holidays. Admittedly I have forgotten most of the Spanish I got there, now the only time I use it is listening to figure skating commentary lol...

I just saw pictures of this item coming out a couple of days ago, it looks so nicely detailed and refreshing, but the price tag is definitely a bit higher than what I would expect. I agree it's probably a good idea to let it go, especially if you don't feel a personal connection with the figure. It's good to PO cautiously, and if you still really want this figure after release, you can always get it preowned or maybe someone would happen to sell it new.
1 year ago
View more comments